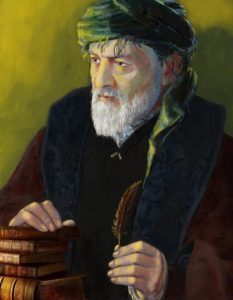 MAWLAWI, ʿAbd-al-Raḥim Maʿdumi (b. 1806, d. near Ḥalabja, 1882-83), a leading Kurdish poet of the 19th century who wrote in the Gurāni dialect of southeastern Kurdistan (FIGURE 1). He used the pen name Maʿdumi, but he is better known as the Kurdish Mawlawi (Mawlawi-e Kord). He was born in the village of Tāwagōz, in the Javānrud district of Iranian Kurdistan, into a family of noted theologians who traced their lineage to the 16th-century mystic and scholar Mollā Abu Bakr b. Hedāyat-Allāh Ḥosayni Kordi, who was also a poet and authored books in Persian (for him, see Ruḥāni, I, pp. 163-65; Mokri). His father, Mollā Saʿid, was the headmaster of a madrasa in the village of Bējawa, in Iraqi Kurdistan, and he himself attended various madrasas, completing his studies at the one directed by the mufti of Solaymāniya. He began his own career as a mullah near the town of Ḥalabja and quickly integrated himself into the religious and social life of the region. He had already been attracted to Sufism, and now he joined the circle presided over by Shaikh Oṯmān Serāj-al-Din, a leader of the Naqšbandi brotherhood among the Kurds (for him, see Ruḥāni, I, pp. 424-25). As a poet Mawlawi benefited from the support of Sufi shaikhs, who were generous patrons of writers and scholars.He  also formed long-lasting relationships with leaders of the Jāf tribe, who were prominent in Kurdish public life, and he enjoyed the steadfast patronage of the rulers of the powerful Emirate of Ardalān in southeastern Kurdistan. He traveled widely in Kurdistan, acquiring a solid knowledge of the speech and customs of its diverse tribes and towns. He lived frugally all his life and was married and had children. His wife, Ḵātun ʿAnbar, predeceased him, and her death he lamented in a number of moving poems. Then he lost his entire library in a fire that destroyed his house, and, during the last seven years of his life, he was blind (Mukhammed, pp. 31-47). His death was accidental; he fell off his horse while traveling to his summer quarters and died a few days later at Saršāta near Ḥalabja (Ruḥāni, I, p. 467).

Mawlawi was a prolific writer, who devoted great care to the exposition of Islam. In much of his poetry, in Arabic and Persian as well as Kurdish, he clearly revealed his didactic vocation. He intended al-Fażila (1868), in 2031 couplets (bayt) in Arabic, as a textbook on Islamic dogmatics for madrasas. He composed another textbook, ʿAqida-ye Mawlawi, 110 verses in Kurdish, for beginning students of theology as an introduction to the foundations of the Muslim faith. Two works were published in a single volume by Moḥyi-al-Din Ṣabri Naʿimi in Cairo in 1933: al-ʿAqida marżiya, 2452 couplets in Kurdish, which treats of various doctrinal currents in Islam with special attention to Ashʿarite school of theology, and al-Fawāteḥ in 527 couplets in Persian, which examines various questions of Islamic dogma, in particular the attributes of God.

An important part of Mawlawi’s work consists of personal correspondence. These letters, addressed to friends, important tribal and religious figures, and fellow poets, reveal much about Mawlawi’s life and thoughts (Modarres, II, pp. 380-487). Some are literary epistles containing the texts of poems. Mawlawi also wrote an autobiography, which remains lost, and he left a short manuscript in Persian, entitled Rābeṭa, which describes the Naqšbandis’ mystical path towards knowledge of the Truth.

The most important of Mawlawi’s works is his divan of poetry, which consists of 2,426 couplets in Gurāni Kurdish. As published by Mollā ʿAbd-al-Kerim Modarres in 1961, it is composed of 31 single couplets (fard), 39 quatrains (do-bayti) and 213 lyrics (ḡazal, each from five to eleven couplets). Many of his poems remain in manuscript, and still others, as already noted, are integral parts of his letters. Besides its literary brilliance, his divān is of immense importance for the study of the Gōrāni dialect and literature, as it is the most representative of all the surviving texts in this Kurdish dialect. In his poems, Mawlawi has preserved archaic forms and has mobilized a great range of linguistic resources, notably a comprehensive classical and Sufi vocabulary (Iusupova, p. 14 and passim).

Single couplets (fard) were rare in Kurdish written poetry, and Mawlawi was one of the first poets to cultivate them. He used it to convey a variety of feelings and moods, especially his own sudden bouts of melancholy, as he contemplated the shortness of human life and the physical and emotional hardships that had befallen him (e.g., the loss of his wife, the burning down of his house, his seven-year blindness in old age). But it was also his means of dispensing practical advice and of improvising as an immediate response to things seen and heard (Mawlawi, 1961, pp. 59, 113). He was much influenced by Kurdish folk poetry and used to great effect its characteristic ten-syllable line with a caesura in the middle and its couplets embodying traditional sayings.

Mawlawi used the same meter, based on Kurdish folk poetry, for his quatrains, which generally follow the aabb rhyme (occasionally abab or aaba). Here, too, he was an innovator, because the genre was rare in Kurdish poetry, especially in Gōrāni. He thus introduced forms and techniques that had been absent from classical Kurdish poetry. The theme of love, characteristic of the ḡazal, he adapts to the quatrain (do-bayti). Such poems are of two kinds, one relaying the emotions of the poet and addressed to real women, and the other lamenting his separation from his beloved and alluding to the mystical love of the Sufis for the divinity. A number of quatrains are meditations on man and his fate and are occasioned by Mawlawi’s own spiritual disquiet. Sometimes he reveals his inner ferment through images of inanimate objects, as in his comparison of an old, broken pitcher with his contradictory spiritual world, and of a new, whole pitcher with his impetuous youth (Khazanadar, pp. 368-81).

Mawlawi’s favorite genre was the ḡazal, to whose development in Kurdish poetry he contributed substantially. He expanded its themes, deepened its philosophical content, and diversified its language. He was of course guided by the great masters of classical Persian poetry. The influence of Ḥāfeẓ was particularly strong, as Mawlawi had been acquainted with him and Rumi and other classical Persian poets since his childhood. He used the same type of imagery found in the lyrics of Ḥāfeẓ (e.g., wine, the ship and the sea, meditations on fate and old age), but they differed in their means of expression and their sense of place (Mihemed, pp. 219-32). It is also evident that Mawlawi, in the main, followed the traditions of Gōrāni rather than of Arabic-Persian poetry. He preferred the syllabic verse of folk poetry to the ʿaruż, and he used the whole poem to elaborate his theme rather than allowing each couplet to have its own meaning distinct from the rest.

Nature is omnipresent in his verse and is rarely separated from man’s sufferings and aspirations (Qeredaxi, pp. 25-40). In a sense, Mawlawi spiritualizes nature, and his celebration of it is often a means of revealing the inner ferment of the lyrical hero, his anxieties and failed attempts to explain the mysteries of existence. Mawlawi’s portrayal of nature, then, is often philosophical, reflecting the tenets of Sufi poetry. Nature also serves him as the background, against which the hero expresses his devotion to his beloved, his despair at their separation, and his yearning to see her, even though he knows they can never meet again. The wind is one of Mawlawi’s favorite images, one that is traditional in oral as well as written Kurdish poetry and is often a messenger to one’s beloved (Mawlawi, 1961, pp. 164, 203). To create an atmosphere of sadness or foreboding Mawlawi has recourse to clouds and mist.

Mawlawi is also intent on revealing the authentic beauty of nature. Autumn (Qeredaxi, pp. 15-24) and winter seem to be his favorite seasons, which he links to the everyday existence of Kurds. Nature provides the setting for his descriptions of their customs and rituals and scenes of village life. Perhaps the most beautiful of his nature poems are those that portray the movement of Kurdish nomads between the mountains and the plains (Mawlawi, 1961, pp. 329-31, 338-40, 417-20, 522-24). His use of popular, sometimes rough speech creates striking images and emphasizes the harsh life of mountaineers. Still other lyrics describe religious holidays. Notable is the poem devoted to the feast of sacrifice (qorbān), in which the play of sounds evokes the excitement of crowds on holiday (Mawlawi, 1961, pp. 348-50).

Sufism strongly influenced Mawlawi’s creativity (Sajjādi, 1978, pp. 97-104). He embodied Sufi pantheistic doctrines and ethical teachings in beautiful poetry. In it we find traditional symbols, love as a union with the divinity, wine as the inciter of ecstasy and thus of intoxication with the divine essence, and spiritual beauty as a means to the apprehension of absolute beauty (Mihemed, pp. 233-46).

In the final analysis, Mawlawi’s work represents the high point of Kurdish poetry in the Gōrāni dialect. He expanded the themes of classical Kurdish poetry and created in forms that his predecessors had neglected. His supreme contribution was undoubtedly his extension of the lyric range of the ḡazal in Kurdish literature; his landscapes, for example, show great mastery of the genre. His artistic originality is perhaps most striking in his fusion of Naqšbandi spiritual passions with the realities of Kurdish daily life.