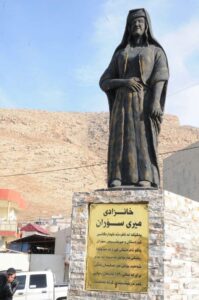 Xanzad was the sister of Mir Sulaiman, who ruled the Soran Emirate in the Ottoman Empire around 1620. After her brother was murdered by one of his military commanders, Lashkry, she took over from her brother. Some sources give a date of 1590 for when Xanzad became ruler.[1]

Laskry fled to the Shingal mountains, where Xanzad sent him a letter with a marriage proposal. When Xanzad and Lashkry met in Harir, Xanzad had Lashkry and all his men put to death.[2]