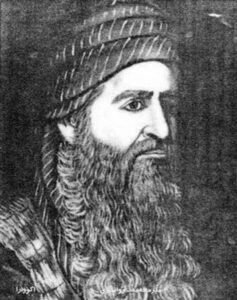 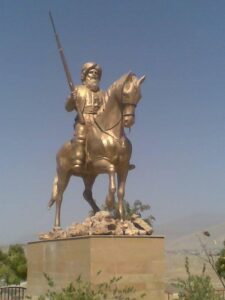 Soran Emirate (Kurdish: میرنشینی سۆران) was a medieval Kurdish emirate established before the conquest of Kurdistan by Ottoman Empire in 1514 and later revived by Emir Kor centered in Rawandiz from 1816 to 1836.  Kor was ousted in an offensive by the Ottomans.

While no date has been established for the origin of the Soran Emirate, Kurdish historian Sharaf al-Din Bitlisi mentions the Emirate in Sharafnama in 1597 as established by a shepherd by the name of Isa. Bitlisi claims that villagers quickly followed the popular Isa and they attacked the Rewan Castle where they established themselves. They took the name Soran meaning from red after the red stones near the castle. Year later, during the Battle of Chaldiran in 1514 between the Ottomans and the Safavids, the Emirate was able to conquer land between Erbil and Kirkuk. In 1534, Emir Ezaddin Sher was executed by Suleiman the Magnificent for his treatment of the Emperor’s servants and the Emirate was given to Yazidis led by Hussein Beg who ruled as a brutal tyran. He was soon toppled by the family of the previous Emir led by Emir Saifaddin who himself was executed by the Emperor in Constantinople, pushing the Emirate into anarchy.

As the region experienced a power vacuum due to the decline of the Baban Principality, the Russian-Turkish war from 1828 to 1829 and the Egyptian–Ottoman War from 1831 to 1833, Emir Muhammad Kor led a tribal force to Rawandizand built a citadel in the town as they build up a military. Between 1831 and 1834 he was able to capture several towns and cities in other Kurdish emirates. 1831 he captured the Bahdinan emirateof Amedi. Kor further expanded his influence to Mardin, Cizre and Nusaybin, compelling the ruler of the Bohtan Mir Sevdin, to accept his authority, which caused serious concern in the Ottoman capital Constantinople.[7] Kor then captured Akreand oppressed Yazidis in the newly-conquered areas. Fearing a cooperation between the Soran Emirate and Muhammad Ali of Egypt, the Ottomans dispatched an army to Soran in 1834. Mire Kor was able to repeal the forces and push towards Iran. Mir Kor was able to extend his authority over a large part of Southern Kurdistan including Erbil, Zakho, Duhok and the Koy Sanjak. This led Kurdish notables from Bradost, Akre and Amedi to complain to Reşid Mehmed Pasha of the Ottoman government alleging they were oppressed by Mir Kor of Soran.

Kor tried to subdue the Assyrians of Tyari in 1834 but suffered a humiliating defeat near the village of Lezan in Lower Tyari. This defeat played a major role in the downfall of the emirate.

A second Ottoman offensive was initiated in 1836 which forced Kor to retreat to Rawandiz, mainly due to the lack of support from his tribal allies.

After having pressured to surrender by the situation given, Emir Kor travelled to Istanbul for negotiations, where he was given authority over the area of the Emirate of Soran. But on his way home he disappeared in the Black Sea area and the Ottoman Empire supported his brother Rasul as the Emir of the Emirate. The Emirate would ultimately fall victim to the growing centralizationof the Ottoman Empire.

There were traits of Kurdish awareness by the Soran Emirate including the desire to unite all Kurdish areas under one rule and the use of Kurdish uniforms for his army. On this, Emir Kor’s brother Rasul told British writer and traveller Frederick Milingen:

With an aspiring genius he had conceived the grande idée of emancipating his country from the authority of the sultans, and of consolidating the power of his family. Uniting the qualities of a conqueror and of a legislator, Mehemet Pasha succeeded in extending his sway over the neighbouring provinces of Kerkuk[sic] and Mussul [sic], and in gathering under his flag a large number of Koordish [sic] troop.

[T]hrough many centuries of Ottoman rule, they [Kurds] could not build up a sense of community between the Kurds and the dominant ruler. Kurds remembered their happiness under Soran and other Kurdish emirates. Therefore, they did not welcome the Ottoman officials. Remembering the past is important for keeping one’s own history in mind.