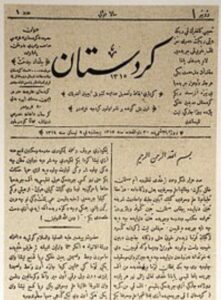 Kurdistan was the first Kurdish newspaper. It was first published on April 22, 1898 in Cairo, Egypt by Mikdad Midhad Bedir Khan, a member of the Kürdistan Teali Cemiyeti. In four years, 31 issues were printed in cities as Cairo, Geneva, London and Folkestone. It was an opposition newspaper published in exile (outside the Ottoman Empire) and supported by the Committee of Union and Progress and was published in Constantinople after the Young Turk revolution in 1908.

In 1914, during World War I, the newspaper returned to Cairo. Its first issues were published solely in Kurmanji, but from the 4th issue some texts in Turkish were also published. The newspaper was distributed for free. Beginning with the second issue onwards, it published a series of the Kurdish national epic Mem u Zin. From its 6th issue the newspaper was published in Geneva, and edited by Abdurrahman Bedir Khan, Mikdads brother who had close ties to Abdullah Cevdet and İshak Sükuti, both editors of the Osmanli and founders of co-founders of Committee of Union and Progress. The newspaper published several articles that were critical to the government of Sultan Abdul Hamid II. It got banned in the Ottoman Empire and had to be smuggled in.

According to the letters to the editor it had readers in cities as Adana, Damascus, Mardinand Diyarbakır. It published articles concerning Kurdish History and literature and the opposition to Abdul Hamid II. One of its first issues included a call in Turkish language to Abdul Hamid for that its distribution shall be allowed in the Kurdish provinces arguing that the illiteracy of the Kurds was a reason for the backwardness of the Kurds but as well for the foreign powers to intervene in the region. In 1918, the newspaper was published by the son of Emin Ali Bedirkhan, Süreyya Bedir Khan. In 1991, the scholar Emin Bozarslan re-published and translated a collection of its suites into Modern Turkish. 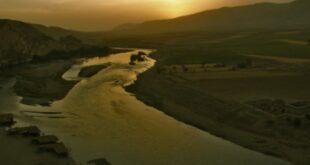 Ancient Mesopotamia in a Nutshell Civilization Name: Mesopotamia Period: 3500 BC -500 BC Originated Location: northeast by the …