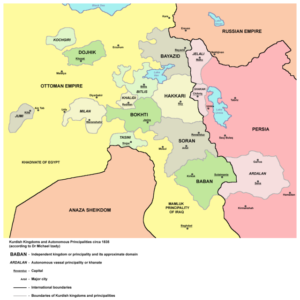 The family of Baban (1649–1850) ruled a Kurdish principality which encompassed areas of present-day Iraqi Kurdistan and western Iran from the early 17th century until 1850. The Baban principality played an active role in Ottoman-Persian conflict. The founder of the princely Baban family is thought to be Ahmad Faqih or Faqi Ahmad from the district of Pijder.[1] The Babans claimed descent from a Frankish woman, Keghan, who was taken prisoner in a battle by the Ottomans. According to the Sharafnama the clan’s first chief was Pir Badak Babe, who is believed to have lived around 1500.[2]

Baban princes retained some autonomy in return for providing security for the Ottoman Empire along the Iranian border. Sulaiman Beg was the first Baban prince to gain control of the province of Shahrizor and its capital, Kirkuk. He invaded Iran, defeating forces from the principality of Ardalan in 1694. Ottoman Sultan Mustafa II assigned him the district of Baban, which included the town of Kirkuk.[3]

The city of Sulaimaniyah was also known as the capital of baban founded by Baban prince Mahmud Pasha in 1781.[4] Baban rulers encouraged cultural and literary activities in their domain. During the first half of the 19th century a school of poetry was established under Baban patronage, of which classical Kurdish poet Nali was the central figure.[5]

Baban princes aided Ottoman forces in Iranian wars from 1723–1746. From 1750 to 1847, Baban history was dominated by rivalries with other Kurdish principalities (such as Soran and Bohtan) and its opposition to centralization by the Ottomans and the Qajars.[6] The principality was destroyed during the mid-19th century Ottoman modernization period. The Baban revolt lasted for three years, but was defeated by a coalition of Ottoman forces and Kurdish tribes. Ahmed Pasha Baban, the last Baban ruler, was defeated near Koya in 1847 and the region of Shahrazur was annexed to the Ottoman Empire. The last Baban prince left Sulaimaniya in 1850, after fighting the Turks for the independence of southern Kurdistan.[7] 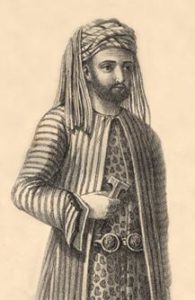