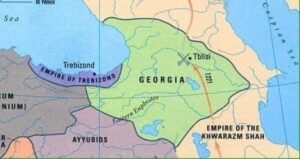 A number of wars between the Kingdom of Georgia and Ayyubid Sultanate over the Armenian lands in eastern Anatolia, fought from c. 1208 until 1210. This brought the struggle for the Armenian lands to a stall,[1] leaving the Lake Van region in a relatively secure possession of its new masters – the Ayyubids of Damascus.

Background
In 1207, the Shah-Armens was taken over by the Ayyubids, who had long coveted Ahlat. The Ayyubids had come to the city at the invitation of people of Ahlat after the last Sökmenli ruler, Izzeddin Balaban (c.1206–1207), who was killed by Tuğrulshah, emir of Erzurum on behalf of the Sultanate of Rûm and brother of Sultan Kayqubad I. Before Ayyubid control could be solidified, al-Awhad faced revolts in Artchesh and Van. As he attempted to quash those insurrections, Khlat joined the rebellion later in 1208. Upon the orders of al-Adid, al-Ashraf led an army of roughly 1,000 troops to support al-Awhad and the Ayyubids managed to put down the revolt in Ahlat, resulting in a heavy loss of life.

Conflict
The neighbouring Muslim rulers and the Georgians met the advent of the Ayyubids with mixed feelings. By 1208, Kingdom of Georgia challenged Ayyubid rule in eastern Anatolia and led liberational war for south Armenia. Georgians advanced towards Artchesh and captured the town. In response Sultan al-Adil assembled and personally led large Muslim army that included the emirs of Homs, Hama and Baalbek as well as contingents from other Ayyubid principalities to back al-Awhad and al-Ashraf.

In 1210 Georgian general Ivane Mkhargrdzeli reached the walls of Ahlat but unexpectedly became the victim of his own foolhardiness. During the siege, Ivane Mkhargrdzeli accidentally fell into the hands of the al-Awhad on the outskirts of Ahlat. He was taken prisoner and by way of ransom had to cede several castles, to liberate 5000 Muslim prisoners and to promise the hand of his daughter Tamta to his captor. The Georgians had to lift the siege and conclude peace with the Sultan, the latter demanded a thirty-year truce, it was this accident, so typical of al-Adil’s luck, that ended the Georgian menace to Ayyubid Armenia. Georgia refrained from hostilities against enemy with whom Tamar the Great had signed a treaty, and the border or Christian-Muslim world was established.

al-Ahwad died in the same year and was succeeded by his brother al-Ashraf who assumed the title of “Shah-Armen” (Rulers of Ahlat). It was he who married Tamta. 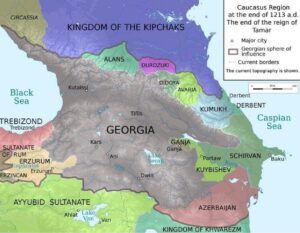